STEADY AS SHE GOES

The General Election result delivered confidence to the housing market, and while activity is rising, price growth remains relatively steady so far. The rental market is moving much more quickly, with prime London rents climbing at the fastest annual pace since 2011, and average UK rents growing at the strongest rate in two years. Gráinne Gilmore examines the latest data.

The annual rate of house price growth eased again in May, down to 4.6% from 5.2% in April according to Nationwide. This compares to an annual growth of 11.1% seen in May last year. The Nationwide index is based on mortgages approved, so it is a first indication of trends after the results of May’s General Election. While average prices rose month-on-month, there was little sign of a large bounce in prices, although it is expected that in the months to come, the certainty provided by the election result could help underpin steady price growth.

The lack of an immediate boost to prices being provided by the General Election was also signalled in the latest House Price Sentiment Index (HPSI), the monthly market indicator produced by Knight Frank and Markit Economics. This showed that while households across the UK expect the future value of their home to rise, the election result did not prompt a jump in the pace at which they expect prices to increase. The overall outlook for the UK economy is relatively benign in the short to medium term. The prospect of interest rate rises still seems some time away as inflation hovers close to zero. Indeed, for homebuyers with a sizeable deposit at their disposal, it has never been cheaper to service a mortgage, with some five-year fixed-rate deals at under 2%, and average rates around 3%. 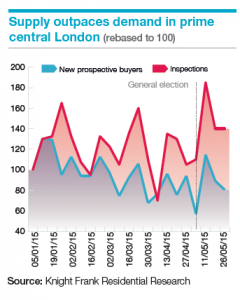 Prices in prime central London eased to the slowest rate of annual growth in May than at any time since late 2009. However, the six-monthly and quarterly rates of growth, both at 0.7%, hit the highest level. 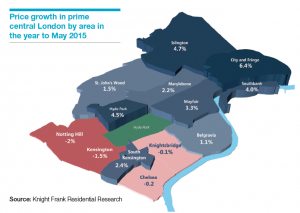 Since the beginning of 2015, data suggests that the slowdown in price growth may be bottoming out.

While confidence has returned to the market after the election, the number of inspections – the pre-cursor to instructions to sell – have risen faster than the number of new applications, as shown in the

chart to the left, suggesting that supply is more than keeping pace with demand. This could weigh on the rate of growth in the coming months. Growth also remains localised across the prime central London market.

Prime central London rents continued to climb in May, reaching 4.2% annual growth. Average rents across the country are also on an upward trajectory as demand for rental accommodation remains strong.

Mr. Frank Khan, Executive Director, Head of Residential Department, Knight Frank Chartered (Thailand) Co., Ltd., added that there are two fantastic factors to invest in London’s prime property at the moment. First, the election was won by Conservative Party; they have the majority so they have full support for good taxes, which benefit foreign investment in London. Second, Crossrail is a superb infrastructure project for London, which will be completed in 2 to 3 years. It will afford better connectivity between London’s downtown area, the Thames River, the suburb areas and Heathrow Airport. With ease of transport from east to west and north to south, the future transportation of London will be very convenient, and getting from the suburbs to downtown will be very easy. Also, future residential projects will come up near the Crossrail.

He stressed, “This is currently the right time to invest in London property. We forecasted that within the next three years, the residential market in some areas around Cross rail and tube station will be up 70% in terms of capital gain. Knight Frank Thailand has the full information of how to diversify one’s investment into London real estate, including the choice investment areas and future hot spots.”